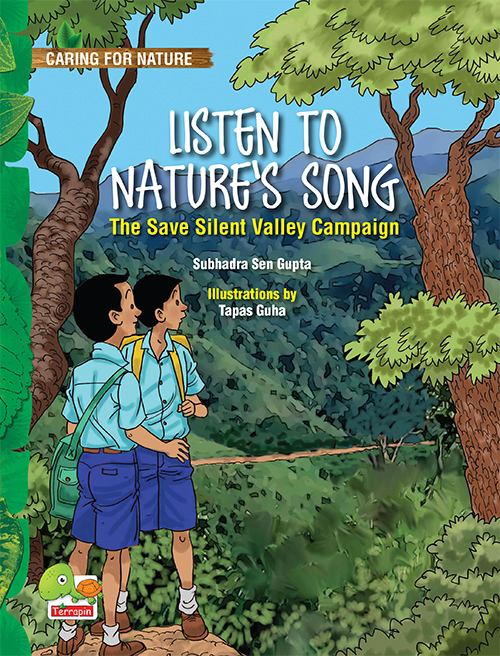 Caring for Nature: Listen to Nature's Song (The Save Silent Valley Campaign)

Early one morning Raghu and Dhani find an unusual bustle at school. Someone important is to speak in the morning assembly. Mr C. K. Nair of Kerala Sashtra Sahitya Parishad informs them about the Silent Valley Movement and how ecology of the Silent Valley, natural rainforests of Kerala, would get destroyed because the government wants to clear a part of the forest to create a reservoir. Is this a bigger trouble than anyone could ever have imagined! Does development justify destroying an entire ecosystem? Is this sacrifice worthwhile? Raghu and Dhani are left wondering.
On a school trip soon, a thin, stooping man with binoculars around his neck uncovers the magic of the silent valley for Raghu and Dhani. In the forest, they spot a lion-tailed macaque, Nilgiri wood pigeon, Malabar parakeet, the great Indian hornbill and marvel at the sparkling waters of Kunthipuzha river and the many shades of green. Who is this mysterious old man? Will this paradise get destroyed? Will Raghu and Dhani join the Silent Valley movement?

Other titles in the series:
• Bapu and the Missing Blue Pencil
• Rao Jodha and the Curse of the Hermit
• Tagore and the Song of the Crazy Wind
• King Ashoka and the Garden of Herbs
• The Forests belong to us
• The River of Life

About the series:
Caring for Nature series focuses on some important unforgettable stories of people’s movements, such as Chipko Andolan and Silent Valley Movement, among others to save their forests, rivers, or land from greedy interests.


About the Authors:
Subhadra Sen Gupta has written over forty books for children including mysteries, historical fiction, ghost stories, and comic books. The Sahitya Akademi presented her the Bal Sahitya Puraskar in 2014. She loves to travel, flirt with cats, chat with auto rickshaw drivers, and sit and watch people. To start a conversation with her on any topic under the sun, you can email her at subhadrasg@gmail.com.

Tapas Guha is a post graduate in commerce and a self-taught artist based in New Delhi. He is one of the most prolific and sought-after illustrator for children’s books and comic strips. His work showcases in many popular books, magazines, and newspapers.

Caring for Nature (Set of 7 books)