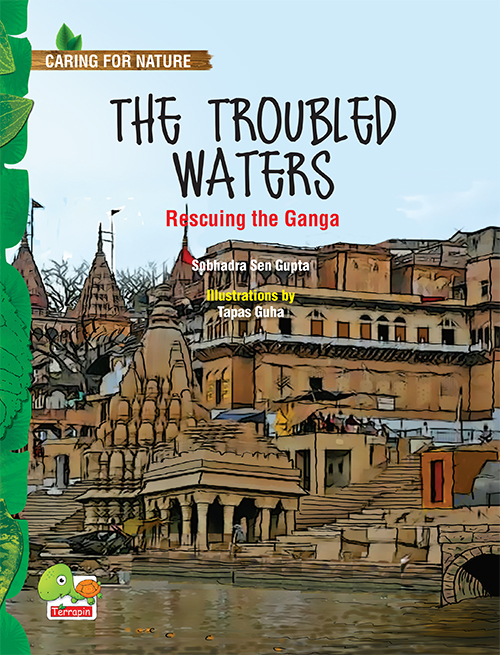 Caring for Nature: The troubled waters (Rescuing the Ganga)

As the first rays of the sun light up the eastern sky and the bells sound in the temples, pilgrims step into the holy waters of the Ganga. They stand chest-deep in the river, offer flowers to the sun god, and take quick dips. Dhani looks at this spectacular morning ritual with a frown on his face. A question has been disturbing Dhani for many days now. The River Ganga, a river that is so sacred to us, is getting polluted at a rapid rate with industrial chemicals, untreated sewage, and ashes from funeral pyres. Dhani looks at the troubled waters and wonders: Why is the river goddess being treated with such thoughtless neglect? And is there a way to restore her to her former glory?

The Troubled Waters: Rescuing the Ganga takes us on a journey along several ghats of the Ganga, tells us what ails this holy river and also shows how it suffers from pollution caused by humans. An eye-opening story.

About the series:
Caring for Nature series focuses on some important unforgettable stories of people’s movements, such as Chipko Andolan and Silent Valley Movement, among others to save their forests, rivers, or land from greedy interests.

About the Authors:
Subhadra Sen Gupta has written over forty books for children including mysteries, historical fiction, ghost stories, and comic books. The Sahitya Akademi presented her the Bal Sahitya Puraskar in 2014. She loves to travel, flirt with cats, chat with auto rickshaw drivers, and sit and watch people. To start a conversation with her on any topic under the sun, you can email her at subhadrasg@gmail.com.

Tapas Guha is a post graduate in commerce and a self-taught artist based in New Delhi. He is one of the most prolific and sought-after illustrator for children’s books and comic strips. His work showcases in many popular books, magazines, and newspapers.

Caring for Nature (Set of 7 books)