In the Shadow of the Leaves by Anjana Basu buy online 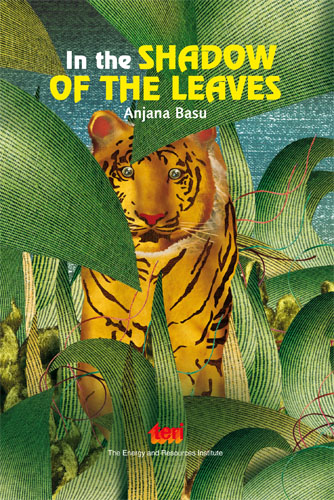 In the Shadow of the Leaves

Rohan and his mother are holidaying in the Kumaon Hills. Rohan should be practicing Maths, he has failed in his exam, but he is spending time reading Jim Corbett’s Man-eaters of Kumaon and wandering in the hills with fearless Manjul, who herds cows. Rohan admires the way she jumps streams like a little cat and her knowledge of the woods. Peace and tranquility, in the hills, is lost when they hear that a tiger has been killing cattle in the nearby villages.

A mysterious man with a moustache materializes at night and seems to spellbind the children and tigers. Rohan is convinced that it is Jim Corbett’s ghost. Manjul disagrees. Whoever the mysterious man is, he is on a mission—save the tiger from poachers and herd it back into the National Park.

The result is a story of mystery and magic.

Review:
“This story is told in a simple lyrical style, set in a simple, idyllic location. It symbolizes dreams and the spirit of adventure which is locked up inside children and which very often find their eventual release. And slowly, simply, through the nuances a modern fairy tale is crafted.”

About the Author:
Anjana Basu was born in Allahabad and started school in London. She works as an advertising consultant in Kolkata. She has a book of short stories, published by Orient Longman, India, to her credit. The BBC has broadcast one of her short stories and her poems have featured in anthologies brought out by various publishers. In the US, she has been published in Gowanus,The Blue Moon Review, and Recursive Angel, to name a few. In Canada, she has appeared in The Antigonish Review. The Edinburgh Review and The Saltzburg Review have also featured her work. In 2003, her novel Curses in Ivory was published.

In 2004, she was awarded a Hawthornden Fellowship in Scotland where she worked on her second novel, Black Tongue which was published in 2007. In February 2010, her children’s novel Chinku and the Wolfboy was published. Her novel Rhythms of Darkness came out in October 2011.

Anjana Basu has also worked on scripts with director Rituparno Ghosh for ‘Antarmahal’ and ‘The Last Lear’ and has subtitled several of his films including ‘Unishe April’, ‘Dahan’ and ‘Chokher Bali’.