Eighteen tides and a tiger by Anjana Basu buy online 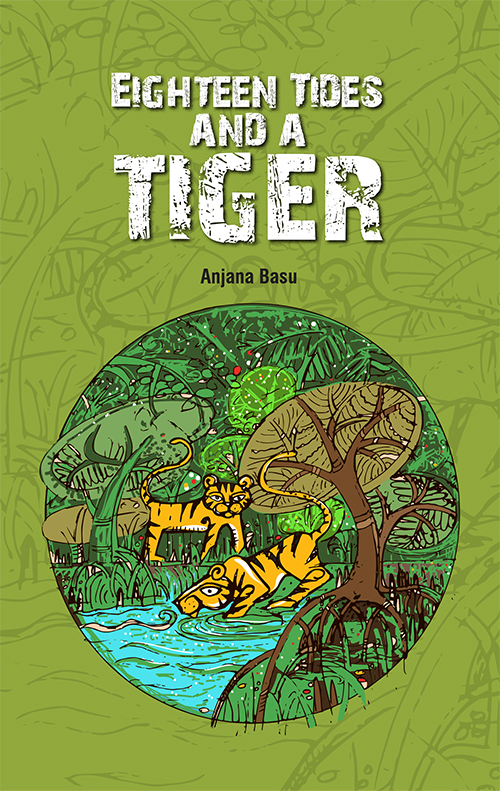 Eighteen tides and a tiger

The Sunderbans, a tangle of forests where, according to legend, ghost tiger roar at the dead of night making the mangroves shiver. However, the tiger Rohan finds is real and needs to be rescued. Rohan, on his first internship, is lost in the middle of this haunted land very unlike the hilly Corbett country he is familiar with. And he needs to be rescued too. Help comes in the shape of a girl who never seems to turn a hair at tigers or marshes! And as always, there is a mystic presence close at hand.

Rohan heard a murmur of, “Mama!” and one or two of the sailors started rocking back and forth themselves in a kind of prayer. He looked wordlessly at the sailor next to him, whose fingers were tight around his clay pot of tea. “Bagh,” the sailor whispered. “Tiger!” The top deck continued to rock in a steady kind of motion as if something might be pacing up and down on it.

There was another tiger. It appeared like a streak of fire out of the scrub trees springing past Rohan’s shoulder, so close that he felt the heat of the big body and its scent filled his nostrils. It had missed him because he had been bending...

Uniting pace, a symbol of courage and along with that a character from a fairy tale to link old and new, So that a bridge is formed between the heroic, romantic traditions of the past and today’s modern world.

About the Author
Anjana Basu was born in Allahabad and began her school life in London. The BBC has broadcast one of her short stories, and her poems have featured in anthologies. She has been published in Gowanus, The Blue Moon Review, and Recursive Angel, to name a few. She has also appeared in The Antigonish Review. The Edinburgh Review and The Saltzburg Review have also featured her work. In 2003, her novel Curses in Ivory was published.
In 2004, she was awarded a Hawthornden Fellowship in Scotland, where she worked on her second novel The Black Tongue, which was published in 2007. In February 2010, her children’s novel Chinku and the Wolfboy was published. Her novel Rhythms of Darkness came out in October 2011. Anjana Basu has also worked on film scripts with director Rituparno Ghosh.
The earlier titles in the Jim Corbett series are In the Shadow of the Leaves and Leopard in the Laboratory.