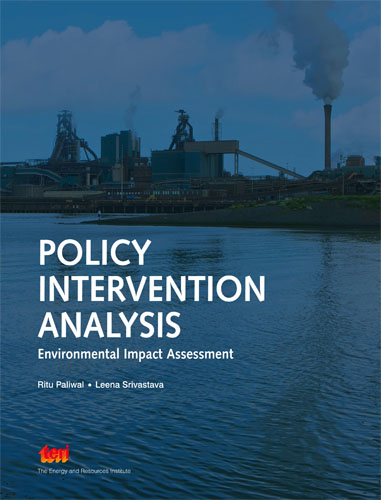 Environmental Impact Assessment (EIA) is crucial for protecting the environment, especially in a country like India—with its dense and rapidly growing population, shrinking land mass, and an economy poised for rapid growth. In order to make EIA an interactive process, it is necessary that it is supported by a strong follow-up mechanism. A properly formulated follow-up process would not only encourage compliance but also increase awareness among the stakeholders.

Policy Intervention Analysis: environmental impact assessment evaluates the adequacy of post project monitoring (PPM) process in India and its effective implementation with a focus on the industrial sector. The book investigates the reasons for poor compliance and gives corrective measures for corrective PPM. It identifies specific measures to improve environmental conditions and provides an action plan that will help strengthen the monitoring and enforcement mechanism based on specific regional concerns.

1. EIA Process in India and its Constraints
Introduction
What is an EIA?
EIA in India
Significance of the Study
Outline of the Book

List of Tables:
1.Comparison of EIA system in various countries
2.SWOT analysis of the Indian EIA system with respect to the 1994 notification
3.Sex ratio and literacy rate in Haldia
4.Land use pattern of Haldia in 1989 and 2001
5.Seasons in Haldia
6.Meteorological data for 2003, Haldia
7.Common fauna of the region
8.Health facilities working in the area
9.Traffic count at mid-blocks
10.List of industries in Haldia
11.Water demand of various operating units in Haldia
12.Ground water usage among units in Haldia
13.Waste water discharge of various units
14.Terminology related to follow-up
15.Guiding principles to implement EIA follow-up
16.Overview of the environmental regulations specified by the MoEF
17.Content analysis of specified environmental conditions
18.Details of source monitoring carried out by WBPCB
19.Details of ambient air quality monitoring carried out by industries
20.Details of source monitoring carried out by industries
21.Compliance status of units with respect to the given TORs
22.Frequency of monitoring in various units along with instances of non-compliance (2000–04)
23.Categories of ventilation coefficient
24.Air quality index for Haldia based on data at two stations
25.Instances of imposed bank guarantee
26.Annual cost of follow-up in Haldia in INR
27.Major air-polluting industrial units in Haldia
28.Fuel consumption of West Bengal—emission factors and sulphur content
29.Adopted emission factors for vehicles
30.Stability classification
31.Wind profile exponent based on stability classes
32.Model performance evaluation for selected stations
33.Details of the variables used in HD module calibration
34.Description of accounted point load discharges to river
35.Hoogly and GBC
36.Details of the variables used in EL module calibration
37.Examples of a few recent and significant penalties in the USA
38.Significant court judgements on environmental protection
39.Significant court-imposed fines/penalties
40.Penalty provision as indicated in the Air and Water Act in India
41.Total environmental cost of non-compliance
42.What are the major contributions of EIA?
43.Will EIA 2006 notification bring substantial improvements in the process of PPM?
44.Where PPM guidelines need elaboration?
45.What are the most probable reasons of non-compliance on the part of industries?
46.Whether duplicity of efforts (that is, compliance checks by SPCB and RO) should be removed to utilize resources of regulatory authorities effectively?
47.For improved compliance and extensive source and ambient monitoring, which of the following arrangement is feasible and will also be a solution to limitation of regulatory agencies?
48.Which enforcement mechanism is more recommended to bind industrial units to regulations?
49.If capacity building initiatives have to be directed towards “legal powers”, which agency should have the legal power of enforcement for environmental regulations?
50.Opinion of industries to improve compliance and implementation